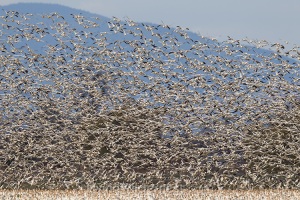 Snow Geese populations have exploded in recent years causing a host of biological problems including damage to the Arctic Tundra habitat  which is shared with numerous other species of waterfowl. In a attempt to reduce the population, biologists at the federal level have turned to hunters by creating the Light Goose Conservation Order which essentially relaxes many of the waterfowl laws, particularly the federal laws (Geese are migratory birds and, as a result, are regulated by US Fish & Wildlife).

Despite the massive numbers of Snow Geese that are killed during these conservation hunts, Snow Geese have a terrible reputation with regards to their palatability. The meat has very strong “livery” odor that immediately turns many people off, hence the nickname “Sky Carp.” I’ll let you in on a dirty little secret  and that is the fact that many of these Snow Geese killed during these conservation hunts end up feeding Coyotes….

Referencing Jesse Griffiths excellent book Afield (once again), we turned these Snow Geese into delicious sausages with no trace of the dreaded “livery” reputation.

Fatback. *Note that you cannot substitute Pork Lard or Pork Trimmings for Fatback. We then added the cure, ground the meat and fat and placed the contents back in the freezer for about 25 minutes.

The cure ingredients were a combination of:

(For exact measurements, you should consider purchasing the book).

Upon removing the meat and cure combination, it was immediately noticed by all that the infamous “livery” odor was completely absent. The Geese, Fat and Cure combination was then stuffed into hog casings and hung in the refrigerator to  cure and dry out for 4 days. During this aging process, the sausages took on a darker color.

From here, it was a simple matter of smoking them and eating them. We ate some of them sliced, dipped in spicy mustard and others on buns with sauerkraut. Due to the curing and smoking process, these sausages should be good in your fridge for at least 10 days, or you could freeze them for later. 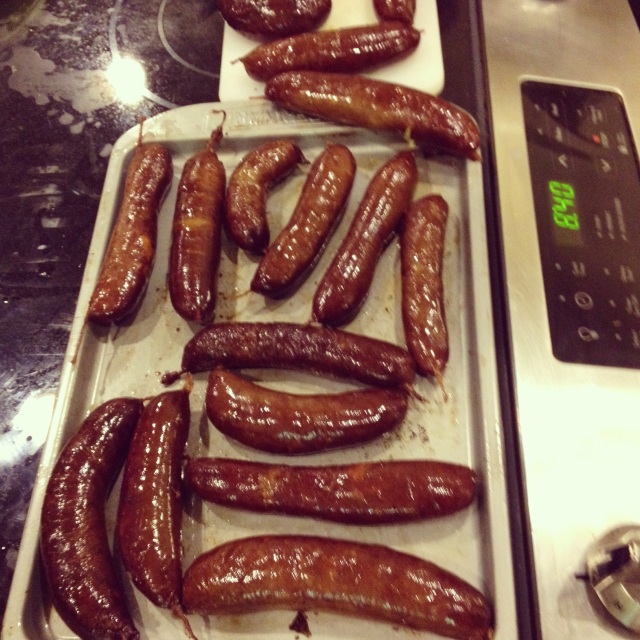