The saddle roast is a cut of historical renown.  In the PBS series Downton Abbey, when Lord Grantham’s meddling sister writes him a letter, his wife Cora, The Countess of Grantham, scoffs that she is probably just looking for a roast saddle of lamb from the estate’s herd.

It is a cut of historical significance, but try finding one at the store. You’ll be out of luck even at higher end grocery shops that carry a good supply of lamb.

I was first introduced to Saddle of Venison Mt. Desert by the LL Bean Game and Fish Cookbook.  Angus Cameron, the cookbook’s author, describes the roast as:

“The saddle is … a noble roast.  If you prepare it, make sure all your guests deserve it.”

I love venison roasts cooked to rare in the oven, and since the saddle roast is the best cuts of venison (backstrap and tenderloin), I had to try it.

A roast saddle of venison is a unique venison dish that requires very intentional butchering to obtain the proper cut.

The saddle roast begins at the first vertebrae past the last rib and ends at the last vertebrae before the rump marked by the hip and pelvic bones. 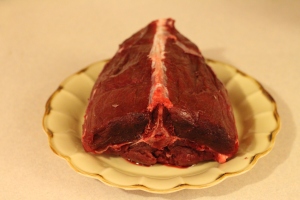 This is a view of the saddle roast looking from the front of the deer (head) toward the rear.  Using your hand you can feel along the backbone for the last rib.  Start by cutting the flank steaks off.  Make your next cut along the rear edge (toward the hip) of the last rib on both sides.  Use your knife to separate the vertebrae just past the last rib.

Next, use your hand to find the hip bone that designates the beginning of the

round.  Start your cut at the last vertebrae and follow the hip bone with your knife.  Repeat this cut on the opposite side.  Use your knife to separate the vertebrae from the hip bone.  Here is a view of the saddle roast from the rear (looking from tail to head).

Notice the “V” formed by the hip bone.  Use your hand to find this “V” and follow it with your knife.

Combine marinade ingredients.  At this point you have two options for marinating:

Preheat the oven to 450.  Dry off the saddle and reserve the marinade.  Place the roast on a shallow roasting pan with a rack.

Roast the saddle for 20 minutes.  Turn down the oven to 375.  Plan on 12 minutes per pound to rare.  Use a meat thermometer and watch the roast carefully.

While the saddle roasts, put 4 cups of the marinade in a wide, deep skillet.  Bring the marinade to a boil and reduce it to two cups.  I started this by pouring two cups into my skillet and getting a visual mark before adding the entire four cups.  Watch the marinade and skim if necessary to keep it from boiling over.  Give yourself at least 40 minutes to complete the reduction and finish your sauce.

Strain the reduced two cups of marinade.  Simmer 1 cup of the strained marinade and 1 cup broth over low heat for 15 to 20 minutes.  Thicken the sauce with a mixture of flour/water (2 tablespoons flour mixed with 4 tablespoons water) and stir watching to make sure it doesn’t stick.  If the sauce gets too thick, add a little water.

Stir in and melt the jelly in the sauce.  Just before serving the roast, stir in the sour cream.  Keep the sauce warm but do not bubble it.

When the roast has reached the proper temperature (125 to 130) remove it to a hot platter, slice and serve immediately with sauce.

How did it Taste?

I really liked this roast.  The flavor was excellent, the meat tender, and the sauce excellent.  Consider your crowd when preparing this roast.  Does the taste of your guests in food favor Rachel Ray or Julia Childs?

The flavors are complex and will be appreciated by diners who are interested in unique cuts of venison prepared in a caring manner.

Landon Loveall is a financial planner in Nashville, TN.  He writes at Cumberland Wealth Planners about the financial planning and money issues faced by couples, who are too busy or don’t know where to start.