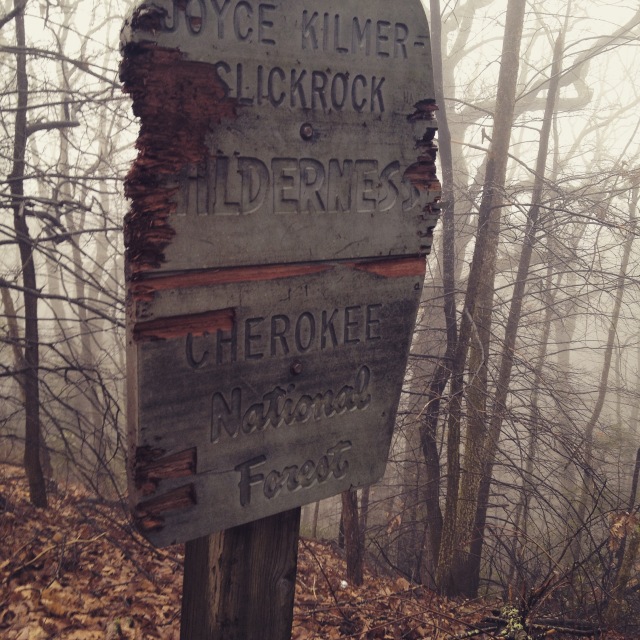 We spent six crusty days in the Smoky Mountains of Tennessee, having the first two days to hunt Whitetail and then another four days for the late season bear segment which also allows for the opportunistic taking of wild hogs. The trip effectively closed out our 2014 big game season. Though poor visibility and rain prevailed, it was still an enjoyable trip.

We had departed a dense deer population with liberal bag limits in West Tennessee and travelled across the state to arrive in an area with a notoriously low deer population and heavy restrictions. Once camp was established, we set out to hunt these sparse, mountain Whitetails.

With visibility limited to 40 yards or less, we promptly plopped ourselves down on what the topo indicated as prime terrain funnels. Having been awake for nearly 40 hours, hallucinations in a semi dream like state set in almost immediately. This was only intensified by the dense and erry fog.

-Food bags hung high in camp- We spent the following day in similar conditions, moving from one terrain funnel to another, but saw no deer movement. Rain was constant and condensation was out of this world. We had to break down our rifles  nightly and perform thorough cleaning jobs to prevent rust. 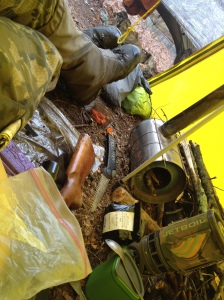 The TiGoat stove paid off big time in dealing with the moisture. We were able to dry most of our gear out each night and stoke the stove before heading out each morning. This would effectively dry our down quilts out while we were out hunting. Condensation was so bad that that it was almost raining inside of our shelters each night. Without the stove, I’m not sure we would have made it past day two. When the cold front moved in, we needed every bit of the insulation we had available in order to stay warm.

Because it was so wet, drying out firewood became a near constant task, though this method of stacking wet wood on the stove proved quite effective.

On the third day, the late bear hunting season opened and we set out to cover as much ground as possible. We had already seen numerous bear sign in our immediate area, mostly in the form of territorial markings but also droppings and even a tire that had been washed down a creek system.

After a full day of plowing downhill through dense cover into a drainage, we found an abundance of very fresh hog sign. Since it looked promising, we made plans to return to this creek at first light and ascended eleven hundred feet back up to camp. 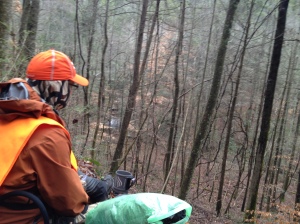 The next morning’s sit revealed no hogs, but we did encounter the first of several bear hounds  that we would see and even share our camp with over the next few days.

These hunting hounds tended to stay focused on the the drainage where we encountered the fresh hog sign.

We had more than one spend the night in our camp, shared some of a jerky with 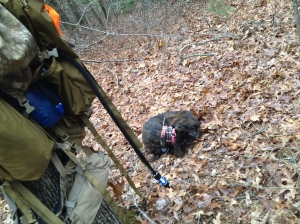 a particularly worn out Plott hound and a couple of the dogs took up with us for portions of the days while we were hunting. In the end, these dogs neither helped us much nor did they hurt our efforts. 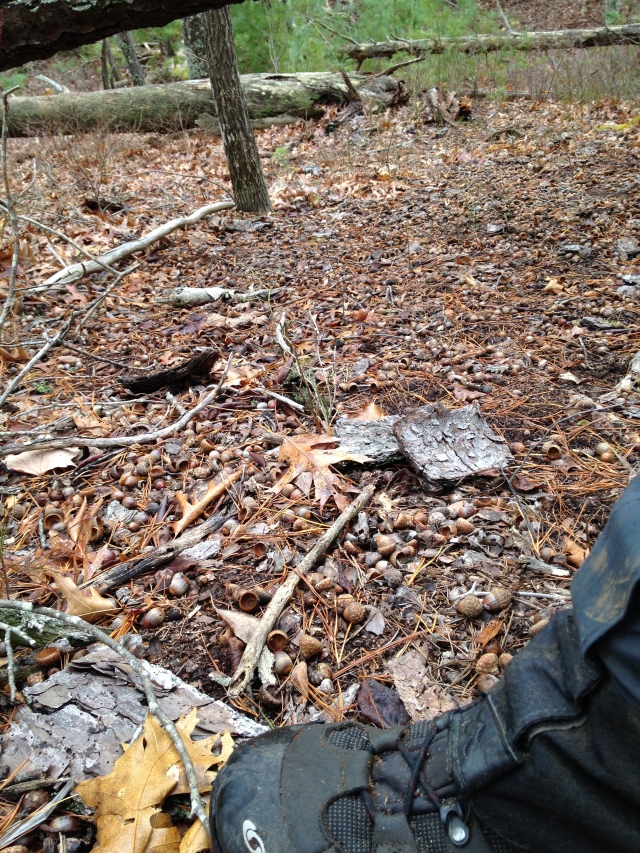 2014 proved to be an absolutely unprecedented year in terms of mast in the Smoky Mountains. Walking around in the woods was akin to walking on marbles. Acorns were literally everywhere. This abundance of late season food source was the primary reason we took this late season trip. Normally, most bears would be denned up this late in the year, however some recent unseasonably warm weather and ample food supply had many bears still on the move.

After three days of dismal weather, the sun finally revealed itself and we could finally get a good look at our surroundings.

Thick woods of the the Eastern US still make spot and stalk pretty much impractical. You either have to encounter animals at terrain funnels or food sources (or just get real lucky). Since food was so abundant, we attempted to cover as much ground as possible hoping to  encounter a bear.

On our fifth day, we put in a tremendous effort and covered many miles including a long, five hour climb up the North Face of Stiffknee Top. We expected to encounter an old logging road or even a trail on top, but we were instead greeted with virtually impassable patches of Rhododendron. The final 2.5 miles back to camp, which we expected to knock out relatively quickly, ended up taking hours. You know those WWII reels of Sherman tanks getting stopped in their tracks by French hedgerows? Yeah, that was us.

My latest generation sleep system includes an Enlightened Equipment down quilt. On this trip, I brought a section of a foam pad as well as my 3/4ths length Neo Therm. After some experimentation, I think that I am going to switch to a full length XTherm. The Feathered Friends down jacket was an excellent upgrade from my 16+ year old TNF puffy which was constantly leaking feathers and had lost a good bit of its loft.

And on the sixth day, more weathered moved in, so we packed back out in the rain with a Plott hound in tow.

Despite not seeing any big game animals, this was a productive trip. I definitely feel more confident in my ability to deal with wet weather for extended periods of time while out hunting. Its one thing to deal with these conditions while backpacking or out day hunting, but adding the element of multi day hunting under the limitations of backpacking  really makes matters more complex. Much like the Big South Fork trip, I was able to further experiment and dial in my cold weather sleep system. We also had the chance to again test our conditioning out in the mountains. Though the Smokies do not offer the elevation or the sheer amount of objective dangers of the Rockies, you certainly can find comparable terrain in terms of sheer steepness and sustained switchbacks. -definitely a good testing ground for any Eastern U.S. based  hunter.

Once again, the Heather’s Choice dehydrated meals really shined in terms of backcountry nutrition and meal satisfaction. When its cold and miserable out and you are expending thousands of calories a day chasing game animals around the mountains, its psychologically imperative that you have meals to look forward to that are both replenishing and rewarding.

On this trip, I again took a mixture of Heather’s Choice, Mountain House, Alpine Aire and Backpacker’s Pantry brands of meals. Of the four, I think I am done with Backpacker’s Pantry. Though their menu sounds more creative and appealing then the Mountain House selection, they tend to end up delivering bland meals that offer little in terms of a meal to be excited about. Mountain House has only a few meals that appeal to me, but I may keep them in rotation from time to time. Next to Heather’s Choice, Alpine Aire seems to be my favorite. In particular, the Southwestern Style Masa with Beef is good and their desserts are almost mind blowingly good. In addition to the dehydrated meals, I also packed venison jerky, venison pemmican, fried country ham, and salami for some additional fat intake.