Over the last few years, I have experimented extensively with various ways of roasting squirrel. The topic of slow cooking squirrels has been thoroughly covered, but there still seems to be some mystery when it comes to actually presenting a squirrel shoulder or leg off the grill.

In order to produce tasty squirrel on the bone, the keys to success involve a two stage, pre cooking process: Brine and Marinade. 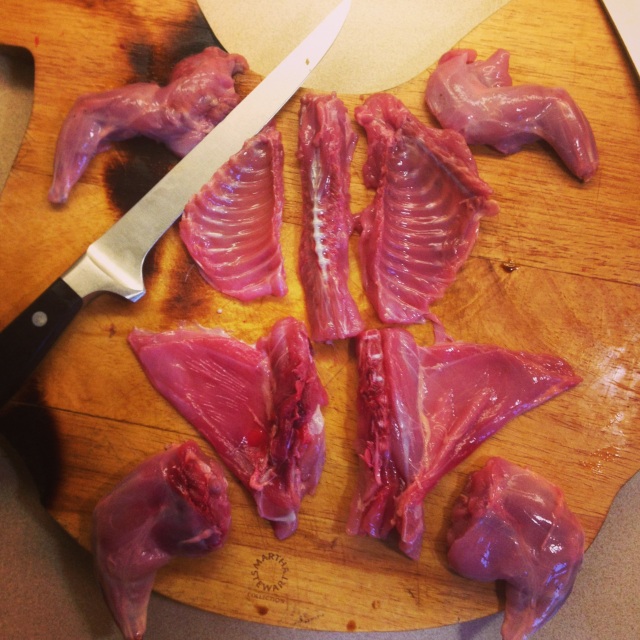 For the brine, I tend to keep it simple: 4 to 1 water to salt ratio with some peppercorns. Heat the water enough to dissolve the salt and cool. That’s it. Given their size, squirrels don’t require a long brining process and four hours should get the job done. The purpose of the brine is for moisture retention. Basically, it is a osmosis process that allows the meat to retain moisture by denaturing the proteins. Following the brining stage, rinse the excess salt from the meat, pat the meat dry and move on to the marinade.

If you break down the fundamentals of a marinade, you’ll discover that you need fat, sugar and acid. This sounds simple enough, eh? For example, Olive oil (fat) + honey (sugar) + lemon juice (acid) would accomplish this task just fine. Many marinades call for ingredients such as Italian dressing which contains oil, sugars and vinegar and accomplishes this end with one bottle off the shelf. Soy sauce is also a popular ingredient since it is so acidic. The same applies to orange juice. Marinades aren’t difficult to improvise once you understand the foundations. Want to go Southwestern? Some chilies, lime juice, oil, and a bit of sugar will get you there. Jamaican? Assemble a jerk marinade on those same principles: Scotch Bonnets, Orange Juice, allspice, brown sugar, vinegar, olive oil, lime juice, garlic, vinegar, fresh herbs etc. Its easy to do various combinations until they taste “right”, add the meat and allow them to marinade overnight. 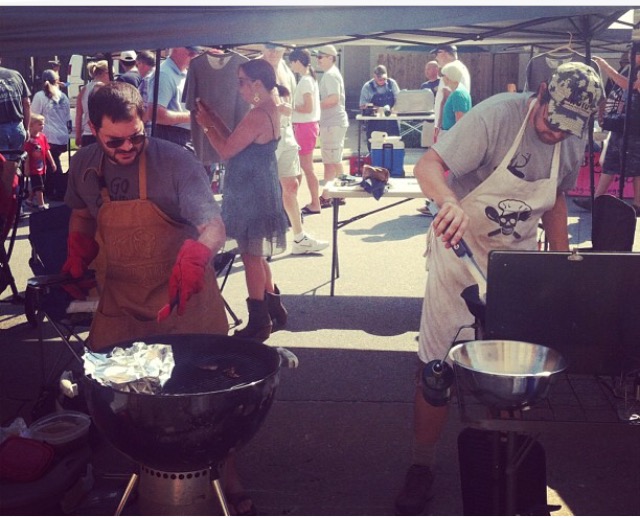 Since squirrel meat tends to be tough, I have found that a longer marinating process, say 12 hours or longer, seems to help. From there, I roast them over flame, a few minutes on each side, brushing with melted butter. I then finish in foil for 20+ minutes (as with most game meats, you allow different lengths of time for size and age of the particular animal). Brine, marinade, flame, foil. This combination will get you there. I have even gone so far as to have a brine waiting in a cooler in the truck and immediately dropped squirrel meat in the brine upon completion of a morning of squirrel hunting; Marinade in the afternoon and cook that night. This method is reliable enough (and popular enough with friends), that I almost never slow cook squirrels anymore (I reserve that process for much meatier swamp rabbits).

For many people, eating squirrel is a bit of a novelty. I know this because I have probably given several dozen or more  people their first taste of squirrel meat. As a result, I tend to eschew the popular method of making squirrel dishes where the meat is in a virtually unrecognizable form. I prefer the “This is squirrel: it looks like squirrel, tastes like squirrel…. you know for a fact that you are eating squirrel” method. It makes it more fun and interesting. Try experimenting. 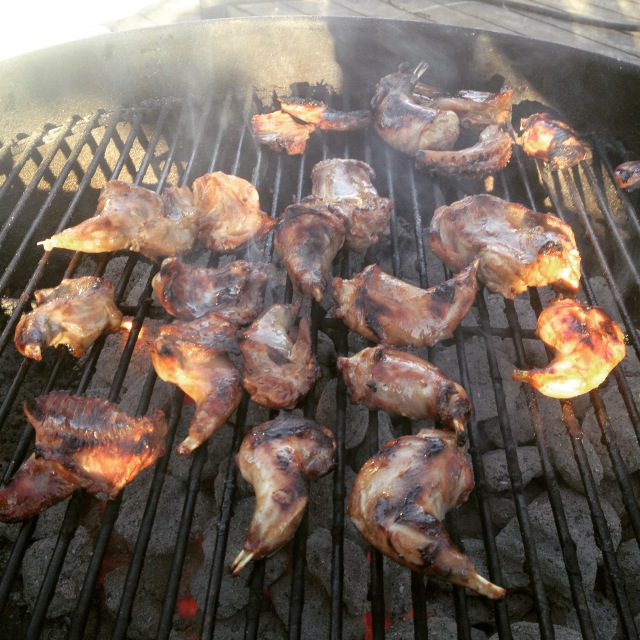 I did this batch today for a potluck. It started out as a Paleo potluck dinner for my Crossfit box, but, as I expected, it quickly turned into a “anything goes” potluck. I went middle of the road. Squirrel, of course, is about a natural of a sourced meat as you can get. I was in the mood for a Asian profile, so I used Soy Sauce, Olive Oil, White Wine, Vinegar, Juice of Lime, Honey, Garlic and Sugar for a marinade.

I started by placing 7 squirrels in a brine for 4 hours. I rinsed off the excess salt (important), patted the meat dry (important) and slipped the meat into the following marinade:

I marinaded the squirrels for almost 24 hours, allowed them to come to room temperature, placed them on a hot grill and brushed them with a mixture of butter and pork lard (melted butter by itself will be fine) until brown on each side. I then placed them in foil and finished them for about 20 minutes with the lid on the grill. They were a big hit and quite a number of people had their first taste of tree rat.

Looking for advice on squirrel skinning? Here you go.