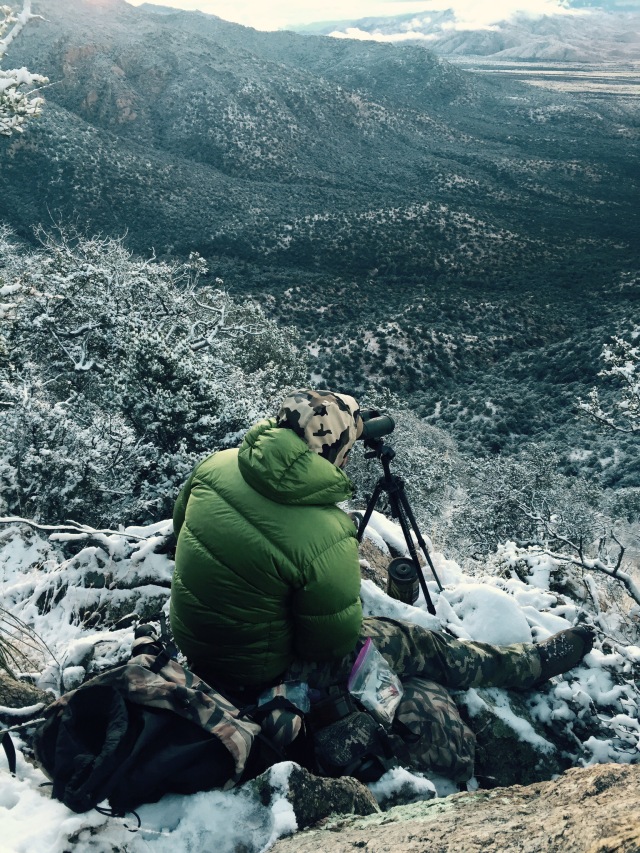 When my friend and hunting partner, TC, managed to draw a much coveted Coues deer rifle tag in a trophy unit of Arizona, I jumped at the opportunity to come along as an extra set of eyes and intuition. Though the better hunting is usually had towards the end of this particular rifle segment, holidays, family commitments and logistics limited us to a window of time between Dec 11 and 20th.  We entered this vast and rugged country with untrained eyes and no real relative sense of what we were searching for other than an allusive Whitetail, masterful in the art of ghosting. Through sustained days of hunting, we did manage to become rather adapted to spotting these animals, figured out some of their tendencies and even found success. 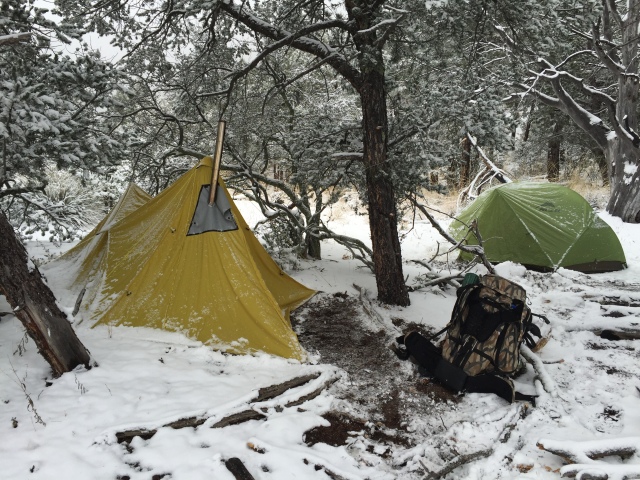 Our first probe into this rugged wilderness, we pushed a little too high and found ourselves in cover that was too thick to effectively spot these deer from a distance.  We did see deer, even seeing a nice buck within the first hour of opening day despite no previous scouting, but they moved in and out of the surprisingly thick canopy too quickly to get a good look, much less a shot. 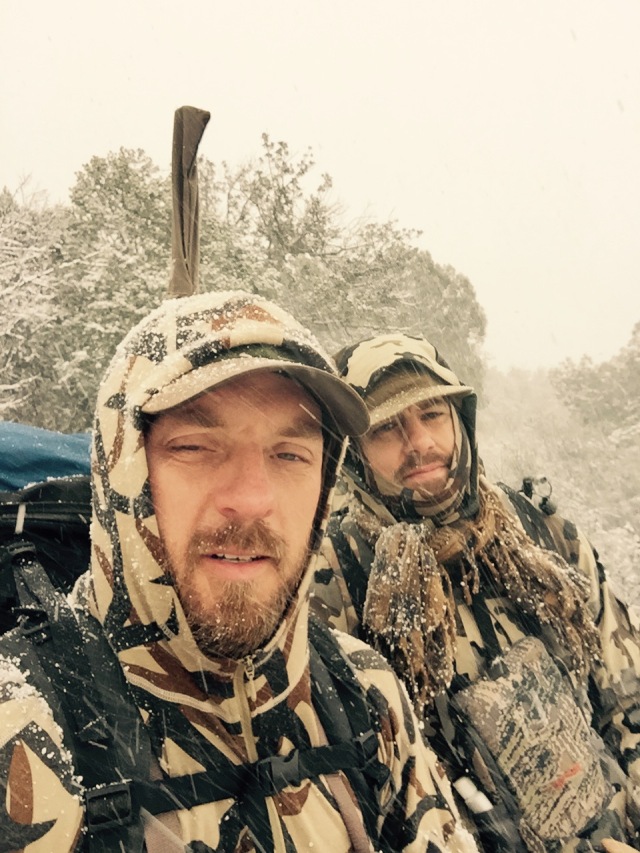 2015 being an El Nino year, we came in expecting harsh weather and mother nature did not disappoint. We experience some wicked cold days and nights while chasing these deer. 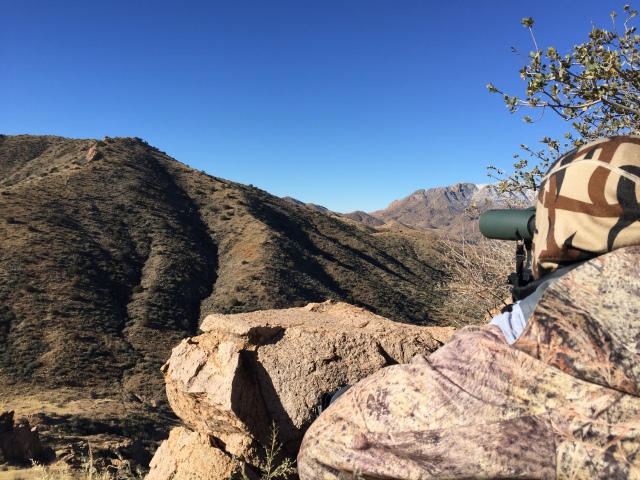 We moved down to a slightly lower elevation in order to get out of the snow. The snowy mountain range in the top right corner of the above picture was our previous location.  By this point, we had begun to figure out exactly what kind of habitat to look for. Coues deer in this region seem to prefer just the right combination of open terrain and cover. Their ability to disappear into this landscape is profound. 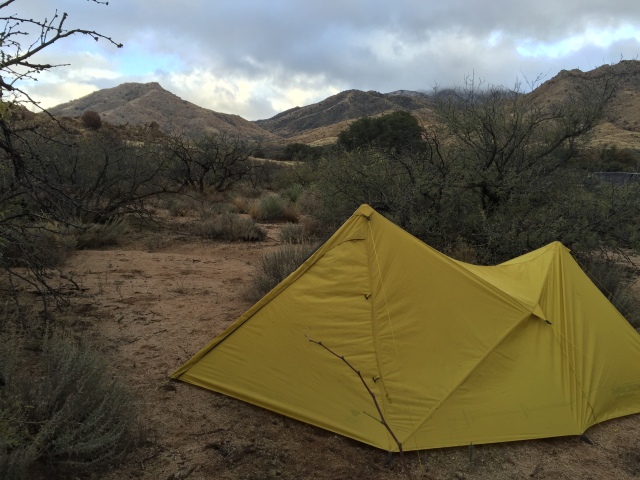 Though lacking in snow, don’t let the above picture fool you. These were some long, cold nights, often in the single digits. Given the length of the nights and our proximity to our hunting area, we often slept for 10 hours.

Sometimes referred to a “poor man’s sheep hunt”, Coues deer hunting involves lots of glassing and lots of climbing. The wind was fairly impressive, too. We spent some days hunting in sustained 30-40 mph winds with 60 mph gusts. 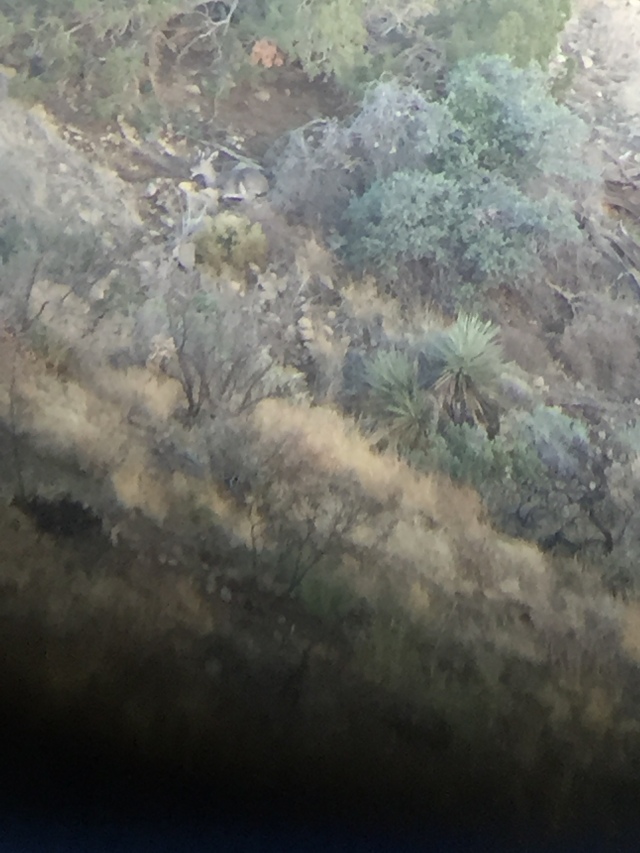 It is interesting how you can stare at a drainage for hours and then, all of a sudden, with a slight shift of the sun, the deer began to “pop” out at you from hundreds of yards away. 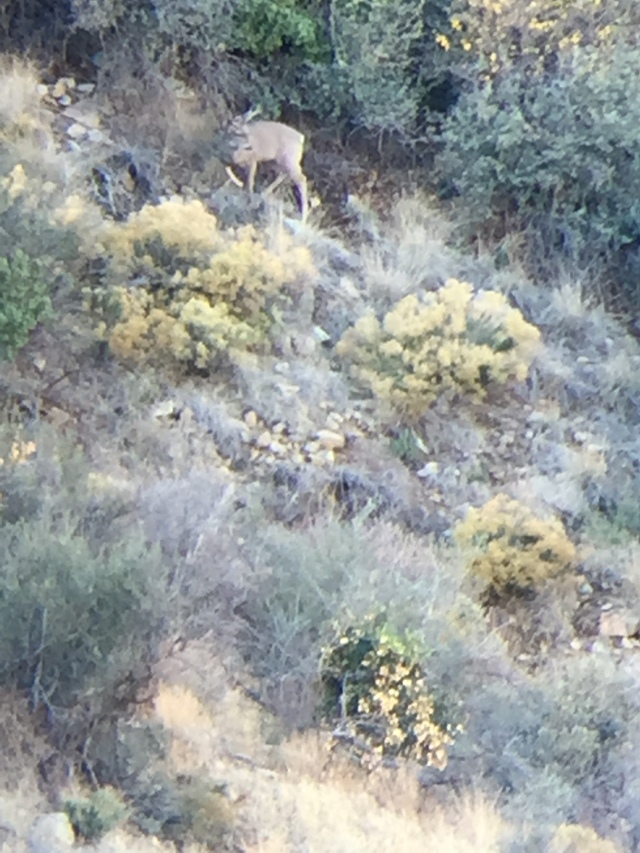 Once you know what you are looking for, you began to find these ghostly deer everywhere. Well, not “everywhere”, but you begin to find them in the places where they are. Coues deer really seem to use the shadows and shifting sun to their advantage. It is amazing how well adapted they are to this terrain and habitat. 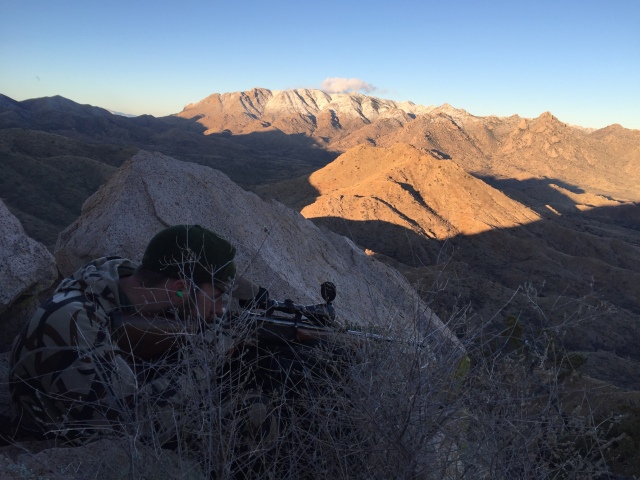 We were told to come prepared to shoot at least 400 yards. After hunting this country, I understand why. Often, we would spot deer at at distances of 300-400 yards and have a total inability to close the distance due to the open terrain.  TC did miss a longer shot on a mature buck on our fourth day.By the end of our hunt, we had successfully identified and purused three different mature bucks, any of which we would have been thrilled to take home. 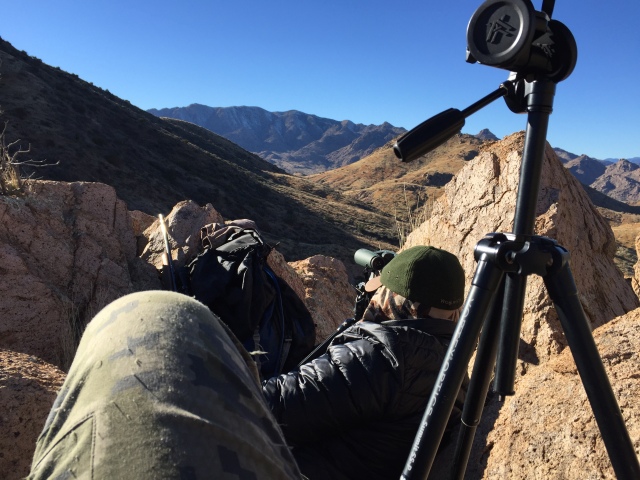 The concept of spending this much time behind glass studying every detail of the landscape and picking apart every feature during that process was something new for both us. The precision involved in this type of glassing is somewhat equivalent to mastering the art of duck calling. 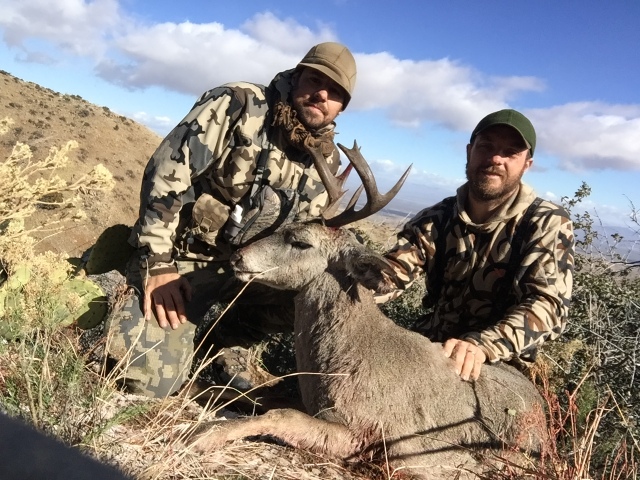 Success at last. TC made an excellent shot on this deer at what we later ranged at 220 yards. During our time in the high desert, we played the “estimate that distance” game a number of times. We found that we were both really terrible at estimating distances in this country. 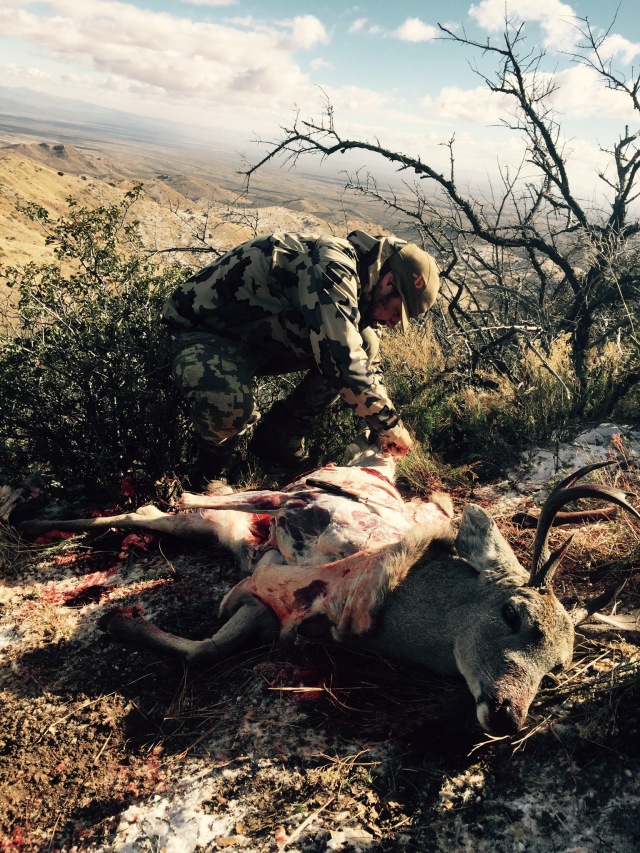 Working as an efficient team, we made fast work of the butchering job. 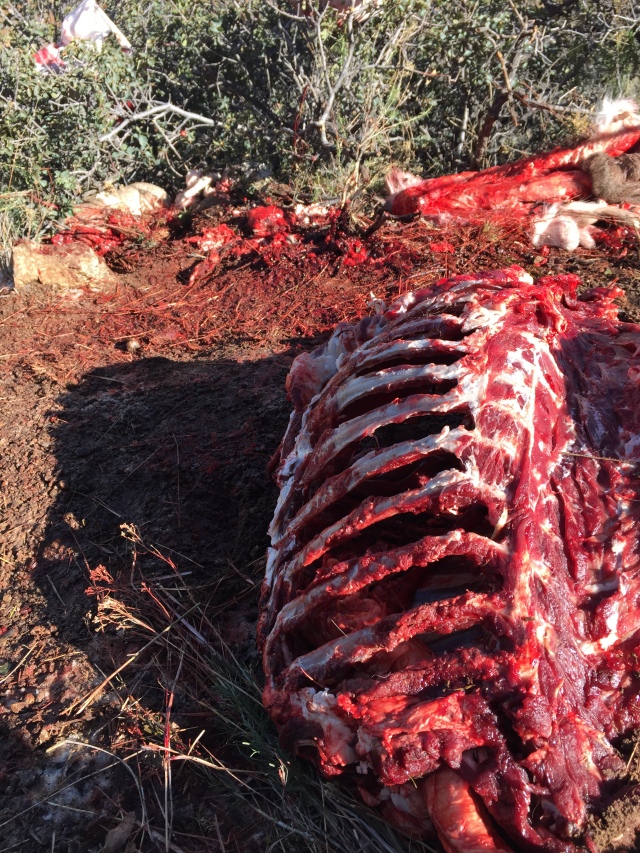 Though these deer are rather small and look even smaller in the grand scheme of such open country, I was actually a bit surprised by the size of this animal once we put our hands on him.  We did lose a little bit of shoulder meat, but we took everything we could get and both found Coues deer to be incredibly tasty. It is a very subtle meat with less earthy tones that Eastern Whitetail. There was also noticeably less silverskin. Our pack out wasn’t too bad -about 3.5 miles. Time which we passed by discussing culinary options for a deer from this region. Chili verde and chili mole were at the top of our list. 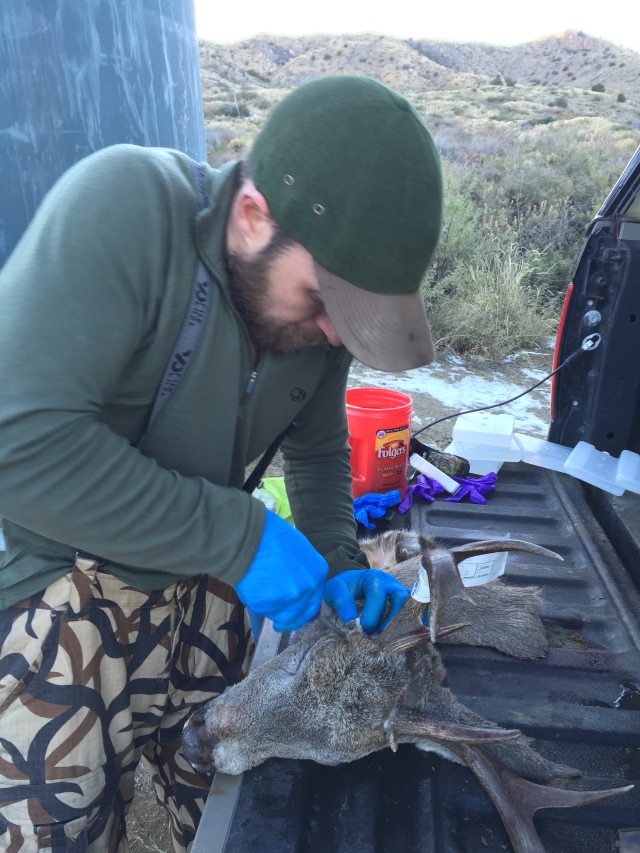 TC is a taxidermist, so it was interesting to observe a high level of skill when it comes to skinning the head out for a mount. We finished up a long day around dusk and, after removing the tongue (of course), we decided to hit the road back to Tennessee. 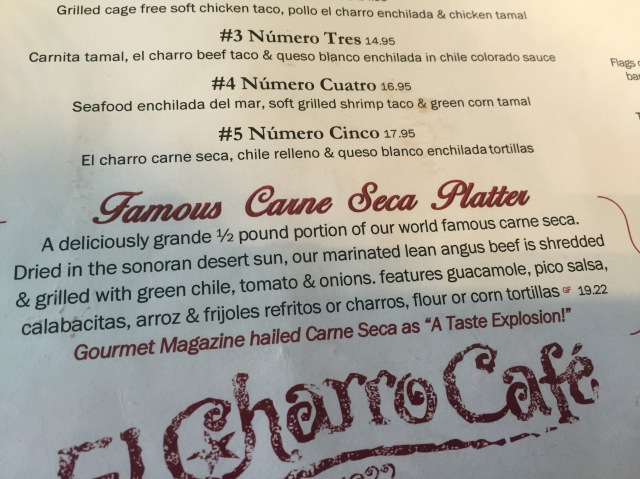 I have a Coues deer roast that has a inevitable date with with this recipe.