Land Between The Lakes 2015

In a continued effort to exploit Tennessee’s larger tracts of federal land open to  hunting access which includes at least two national recreation areas that are exceptions to the national park services’ usual policy on hunting (it is rare that they allow it),  I successfully  drew a Whitetail tag for one of the two annual quota hunts that take place at Land Between the Lakes. Centered on the TN/KY state line, the historical significance of the area dates back to the Civil War with the Confederate construction of Fort Henry as attempt to blockade the Tennessee and Cumberland Rivers. Back then, the area was known as the “Land Between the Rivers”, however, the Corps of Engineers eventually decided to level the two rivers through a series of locks and dams that would form two lakes, thus leaving a narrow strip of peninsula called “Land Between the Lakes.” LBL was managed by the Tennessee Valley Authority for a number of years  before being handed over to the NPS.

The TVA did very little in the way of logging or habitat management and, with the exception of some agricultural leases, the land remained unaltered in a state of mature hardwoods for a number of years. As aesthetic as this may seem, mature hardwoods just don’t provide great habitat for Whitetails. Once the NPS took over, they began doing a bit of rotational select logging, developed wildlife habitat programs and they also developed a Elk and Bison range on the KY side. As far as deer hunting, LBL remains open to archery hunting for the duration of the statewide season, but firearm hunting is only permitted on two quota hunts which operate on a priority point system. Most hunters get drawn about every 3 years or so. I was fortunate to draw my first LBL tag with only a single priority point. 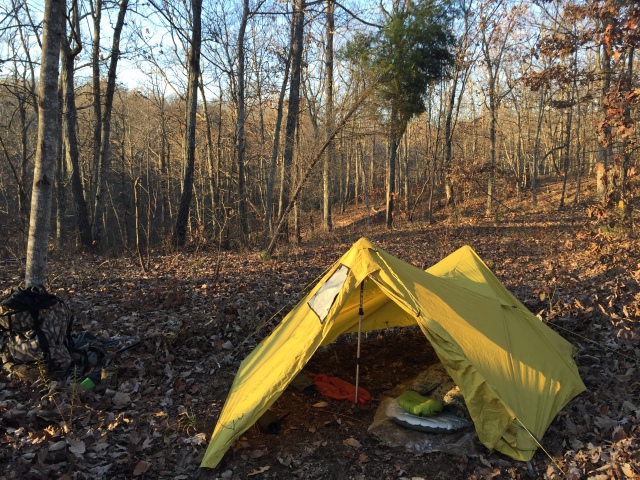 With no time to scout the area and with the consideration that hundreds of hunters would suddenly be hitting the woods, my general tactic for hunting LBL was to get into a remote area and stay put over a key terrain funnel for the duration of the hunt. With a general shortage of available cover, so many hunters suddenly entering the woods, and the fact that rutting activity is brewing around the time of this particular hunt, you can generally count on deer to be the move, either rutting or being bumped by hunters throughout the day. On these quota hunts, you are issued one deer tag, good for either sex, however, with a freezer full of elk meat, regular access to good local hunting land and LBL having a general reputation for being the “Land of Giants” (with regards to Whitetails), my plan was to remain highly discriminant if and when the opportunity to pull the trigger presented itself.

One of the problems with hunting such a narrow peninsula, even if it does happen to be the largest inland peninsula in the US at 160,000+ acres, is that there are numerous roads, access points, trailheads, firebreaks and agricultural roads that make it difficult to get more than a half a mile from any single point of access. For this reason, I was very selective with which unit I applied for, selecting a unit where I could reasonably out walk the competition.

I arrived well behind schedule on the day before the hunt with only 3 hours of daylight left. Using a topo map, I had pre-scouted an area with good terrain funnels and headed in with camp on my back. Very few, if any hunters, actually camp in the woods, though I did see several car campers. Most opt for amenity camping or stay at the local hotel which advertises a walk in deer cooler as a selling point. Day 1 went pretty well with some deer sightings, all of them well within shooting range. I saw 4 different does and 2 bucks, all between the hours of 10 am and 2:30 pm. With the exception of one of the bucks who seemed intent on seeking out estrous does, the other deer all appeared to have been bumped by hunters leaving and entering the woods. Since I was hunting a mere few hundred feet from camp and with the short days, I was able to log somewhere in the neighborhood of 10-11 hours of sleep each night, which was great. I did jump online after the first day to check the harvest reports and saw that 99 bucks had been checked in, including several 12 pointers, a couple of 13 pointers and even a 14 pointer. There were also several Whitetails checked in that weighed in the 225-250 pound range, which is about as large as Whitetails get in this part of the country.

As quota hunts tend to go, day 2 was significantly slower in terms of shots heard and deer sightings. By this point, many deer tend to figure out some safe areas, be it safety zones off limits to hunting, or overlooked pockets of hunting pressure. Despite another all day sit, I did not see a single deer on day 2. I spent a third night in the woods before heading out and back home. Though, LBL was a bust for me, the area and the nature of the quota hunts has the potential to produce big buck sightings for almost any hunter sitting anywhere at any time. As a result, I’ll look to rebuild a priority point or 2 with the intentions of returning in 2017 or 2018.

3 Responses to Land Between The Lakes 2015